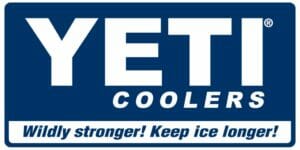 In 2006, YETI Coolers was founded by brothers Roy & Ryan Seiders with a simple mission: build the cooler we’d use every day if it existed. One that was built for the serious outdoor enthusiast rather than for the mass-discount retailers. One that could take the abuse they knew we’d put it through out in the field and on the water. One that simply wouldn’t break. They decided early on that product innovation would come from necessity and firsthand experience — not from market research and data analysis. And they’d never sacrifice quality for a few extra bucks. Because having your cooler’s lid cave in when using it as a casting platform should never be part of anyone’s fishing trip.

The brothers are so glad that they weren’t the only ones looking for a YETI. Today it is the cooler of choice for outdoor enthusiasts, pros, tailgaters, and backyard barbecue kings. And that still gets them fired up. Ultimately, life is about having a good time doing what you love. And for them, that’s being outdoors hunting whitetail, catching a tarpon on the fly, and spending time with their families and buddies. They’re wild at heart. So their coolers couldn’t be anything less.

This package includes a YETI Cap, Foam Koozie and a YETI decal.