Hunting is part of a culture rooted deep in this great country of ours that is centered around God and family. Red Arrow’s southern roots have the same foundation, and this show is as real as it gets! Host Kip Campbell hunts all types of wild game both big and small all over the country in 100% fair chase environments. Red Arrow occasionally features award-winning country music singer, friend, and fellow hunter Zac Brown, of the Zac Brown Band, on hunting excursions when he finds time to get in the field while touring with the band. The show is primarily bow hunting, with occasional firearm hunting and pro second amendment and self defense segments. Ride along with Kip and crew as he takes you from the ultimate in adventure hunts abroad, to intense action in the southern backwoods of Virginia he calls home. Red Arrow is a fast paced and comedic show that’s full of great music, good times and great hunting action! 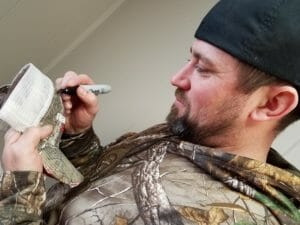 Kip Campbell grew up in the country near the banks of the James River in Central Virginia and spent his days bow hunting, fishing and playing sports at Fork Union Military Academy.  Kip knew early on he wanted to work with a weapon in his hand, so the military, law enforcement or pro-hunter were the only jobs that would be acceptable in his mind.  The last option seemed pretty far fetched… seeing as how he didn’t come from a “big buck” part of the country and had no tie in with a hunting companies.
Find Red Arrow TV at redarrowtv.com

10 dollars to start it off

10 dollars would bid more if it were a profit