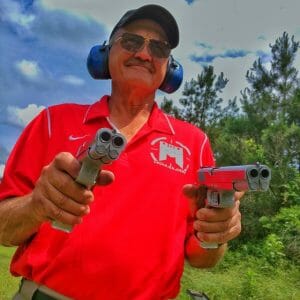 Jerry Miculek is one of the best all-around shooters on the planet. His accomplishments during his more than thirty-year shooting career include fifty-two National titles and forty-five World titles. Although best known for his amazing feats of revolver speed shooting, Jerry is also one of the top Multi-Gun competitors in the world, demonstrating equal prowess with pistols, rifles and shotguns. Jerry became a member of Team Smith & Wesson in 1989. Since that time he has participated in countless competitions, performed hundreds of shooting demonstrations, and represented Smith & Wesson and his other sponsors at store promotions and trade shows throughout the world. Jerry’s varied shooting skills have been highlighted on numerous television programs including the Outdoor Channel’s Shooting USA; History Channel’s Top Shots, Sharpshooters, and Extreme Marksman; Discovery Channel’s Son’s of Guns, and NBC Sport’s Hot Shots.

Save
Previous articleJana Waller with Skull Bound TV and Kryptek