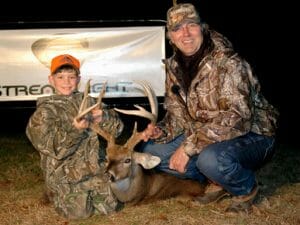 Jackie Bushman founded Buckmasters in 1986 in his hometown of Montgomery, AL. At the time, he was a world-ranked tennis professional but his real love was hunting. He envisioned a national deer hunting association that would encourage proper hunting ethics, sportsmanship, hunter safety, wildlife conservation, and promote a positive image of the deer hunter.

In 1987, Jackie introduced the annual Buckmasters Classic/BADF Life Hunt, bringing together celebrities, writers and critically-ill hunters to raise awareness of our obligation to help our fellow hunters.

Bushman also moved forward with the Buckmasters Top Bow Indoor World Championship archery competition, which is now the most prestigious in the sport, offering world-class archers a chance to test their skills. In 1993, he added the annual Buckmasters Expo, one of the largest and most popular hunting consumer shows in the country.

In 1986, 29-year-old Jackie Bushman acted on an idea he’d been developing since he was a teenager.

The young Montgomery, Ala., native had grown up exploring the great outdoors and hunting with his grandfather. He wanted to take the camaraderie of the hunting camp to a national level. He envisioned a deer hunting association that would encourage a feeling of community, sportsmanship and wildlife conservation while promoting a positive image of deer hunters everywhere.

Jackie began traveling the United States selling memberships, which included his new Buckmasters Newsletter and a few gifts. With the support of family, friends, investors and new subscribers, his dream grew quickly. In 1987, he published the premiere issue of Buckmasters Whitetail Magazine.

Buckmasters is now in its 28th year and going strong.