The Burris Optics Company was formed in 1971 and named after its founder Don Burris. Burris was a design engineer with Redfield, a Denver-based optics company, who believed he could build a better riflescope than what was currently available.

During his 12-year career with Redfield, he focused on product design and management and was responsible for many industry innovations such as:

During the company’s first four years, Don Burris’ new company produced rings, bases, and open sights, but it wasn’t long before he was back to the design and manufacture of sporting optics. The company’s first optic was a riflescope called the Fullfield, which he began to market in 1975 and it has grown to be an industry icon that is still manufactured today.

Although, Don Burris passed on in 1987, but the company that bears his name continued to grow and be first to market with a number of innovative products. It was acquired by Beretta Holdings in 2002 and became part of the Beretta family of companies. Today, the company’s product line includes hunting and tactical riflescope scopes, red-dot and reflex sights, and a complete line of rings and bases. 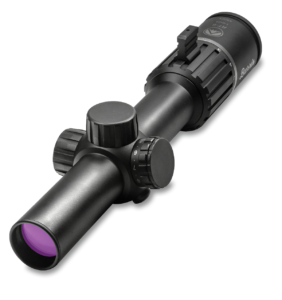 The RT-6 1-6x scope is designed with speed in mind. Speed reigns supreme in three-gun competition. So if you want  to compete, you better be fast on the target and fast  to  shoot.  Race inspired and tactical  strong, the new RT-6™ is built for speed, accuracy  and easy tactical handling.  Guaranteed to shave seconds off the clock.  Also check out some of the best military and tactical watches.

This auction was donated to us by our friends at Burris Optics. Included in this auction is the RT-6 1-6x scope and a signed cap by  World & National Champion Shooter Bruce Piatt. Full retail value of $400.00

Find Burris Optics at burrisoptics.com and at

Find Bruce at brucepiatt.com and at